Zen Confidential: In And Out of A Monastery

Spirituality and religion always brings with it an aura of righteousness. Being spiritual is popularly accepted as being viceless and knowledgeable. I believe the best achievement (and the only) of Zen Confidential, a spiritual memoir by "wayward" Zen monk Shozan Jack Haubner, is the total demolition of this concept.

Jack Haubner who used to be a liberal screenwriter and comedian, son of an arms manufacturer and hailing from a Catholic right-wing family, decides to embrace Zen Buddhism due to the influence of his mentor, a gay janitor, who indulged in pleasures of the world as hard as he meditated. After a decade in monastry, being promoted to an osho eventually, he decided to return back to the world and write about being a monk. 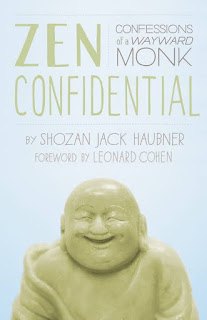 The book is advertised as comedy. Though humorous in parts, it is not out and out funny. Even the humor is pretty uneven. The first few chapters contains most of the potty jokes in the book. Once you survive them, there are a few chapters that are really good and poignant. The final chapters doesn't offer much value, as they are mostly nostalgic trips of the author. These may be deeply personal and important for the author, but of much less value to a casual reader.

As mentioned initially, the book portray Zen philosophy different from the usual serene, peaceful, picture-perfect images one associate with it. The author emphasizes that Zen is not a solution to all problems. According to him it is more of an unlearning process. It enables the practitioners, not to fly above the problems, but to go through it much more patiently. It is a way to see oneself above oneself and transcend ego, the root of all problems according to Buddhist philosophy.

Email ThisBlogThis!Share to TwitterShare to FacebookShare to Pinterest
Posted by Harish P I at 8:15 PM