We like certain people for the positivity that they radiate. Robin Williams was one such guy. Many of his movies, even the lesser ones, make the viewer feel happy and content, just by his magnificent presence. So, it was with shock that I woke up to the news of his demise. My despair knew no bounds when I found out it may be a suicide. This guy, who, as per me was the most cheerful guy on reels, was apparently depressed and sad in his real life. This fact took some time to sink in. Guys, if any one of you feel discontent or sad or depressed; feel free to get help immediately. That's all I have to say on this topic.

The first movie of Robin Williams that I watched was Mrs. Doubtfire, the one that inspired Avvai Shanmughi (Chachi 420 in Hindi). It was a riot. After that I happened to see Jumanji, Flubber, Patch Adams and much later Good Will Hunting. I have not seen many of his films that are the favorites of critics except the last one that I mentioned. But even these movies were sufficient to make me realize the talent of Robin Williams. Most of his roles had a sweet, sugary and a little bit loony undertone and mostly he played the pretty ordinary guy who do extraordinary deeds compelled by circumstances very convincingly. It was only recently that I watched one of his negative roles, in the movie Insomnia by director Christopher Nolan. Even in that movie the subtlety that Robin Williams displays in portraying a psychopath is commendable.

Some years back I was browsing Wikipedia about the cartoon character Popeye, one of my childhood favorites, when I first came to know about a live action Popeye movie released in 1980. It was the first leading role of Robin Williams. It was registered in my mind as an awesome trivia. Yesterday in an article about his movie career, I came across Popeye movie again. So out of respect to this wonderful man, I decided to watch Popeye and blog about it.  The movie, directed by Robert Altman was in its time panned by critics and was just a moderate success. May be these factors stopped them from producing a sequel, but the movie had every potential for the start of a series.

First thing that makes this one special is the presence of Robin Williams, who plays Popeye just like in the cartoon but simultaneously renders him that extra depth which only a genius could do. The movie itself is very close to the cartoon. It has high energy, craziness and a bizarre sense of humor. The set of the village of Sweethaven makes a perfect background. There is very little plot or characterization. The movie unfolds in a totally haphazard manner. Lot of characters just come and go on screen with no more purpose than a background prop. Some of them make a lasting impression- like that guy who tries to pick his fallen hat but fails as his feet strikes it away from him every time he tries! But for me, surprisingly all these work brilliantly.

The humor is mostly verbal and a very little slapstick. I was expecting more of slapstick as it was about Popeye and due to the presence of Robin Williams. The way Popeye speaks to himself, just like the cartoon is brilliant. Robin Williams convincingly portrays him as an awkward and at the same time tender guy. There is a scene were Wimpy takes Seetpea for betting in horse race. All the horses are small plastic toys operated by wheels, and the place is inside a brothel! Did I forget to tell the movie is actually a musical? The songs are very funny and not just inserted to please the ears of viewers. The one inside the saloon is hilarious.

It is a very crazy movie, the cacophony of which may not be liked by many disciplined viewers. But I would recommend it to the adventurous ones and for the fans of Robin Williams. 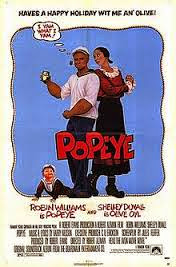 Labels: comics, movie, popeye, robin williams
Email ThisBlogThis!Share to TwitterShare to FacebookShare to Pinterest
Posted by Harish P I at 1:45 AM