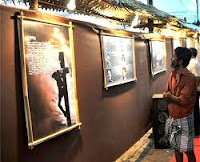 One controversy that ruled Kerala for the last couple of weeks was the attempt of Communist party to hijack Jesus Christ to their side. This happened when, on the posters displayed in public places announcing a party convention, along with the stock presence of Marx, Lenin and the like, Christ was also given a place. Church and staunch Christian believers raised their objections and were concerned that this was a move to influence Christian voters. The Party declaration claimed that Christ was also a Communist because of his ideology that favored the downtrodden. Everyone suddenly joined sides, as is usual in Kerala, and there was a lot of mud slinging for days together.
I personally feel that CPM had in their minds the votes of Christian community, because they had used the same ploy before by giving place in party posters for Swamy Vivekananda and Sree Narayana Guru when there was a fallout of Hindu voters when BJP came to power in center. That time also the social reformist ideology of these great men was used to justify the addition.
The attempts to marry Communism and Christianity is not new. There was a branch of philosophy called Christian Communism which says that teachings of Jesus Christ is essentially Communist in nature and Christianity in its pure form is communism. Present Christian Communists trace back the ancestry of the philosophy to the period of Apostles. They believes that Capitalism as a social system is evil and it should be forcefully converted to Socialism and then to Communism, but they disagrees in the way this has to be achieved and the resultant community has to be organised.

A few weeks back I was reading this interesting book called Black Mass by John Gray that tried to find the similarities between many of the important movements in human history, millenialistic movements as he terms them, and how they have made us, especially the West far away from confronting any situation realistically. It is an alternate reading of history. According to him all the modern religion and philosophy has a Utopian solution for all the problems. Through a struggle, it may be violent or not, the entire system is toppled and a new system will emerge and from then on wards everything will be ideal. This is the basic ideology of modern religions like Christianity and radical Islam, Enlightenment movements of Europe like French and British Revolutions, Communism and revolutions in Russia and China and a recent example being the crusade of US and UK for importing democracy to third world countries. All these movements make their ultimate goal an unattainable Utopia, and the price to achieve it will be tremendous. And as it is an unattainable goal, the result will be doom.


As for what to be done to counter the work of Communist in Kerala to drain the believers, Church can consider recommending sainthood for Karl Marx. Or better will be for Karat and Achuthanandan...
Labels: books, current affairs, politics
Email ThisBlogThis!Share to TwitterShare to FacebookShare to Pinterest
Posted by Harish P I at 9:18 PM