Malayalam movies are in the grip of new generation fever these days. Multi layered stories, new visual language, bold plots, liberal usage of sleaze and obscene language mark these cinematic ventures. Some of them, like Amen managed to break barriers, while some of them, I feel are just average. Like Neelaakasham Pachakadal Chuvanna Bhoomi, which though had beautiful visuals and good narrative style, failed to touch me in an emotional way.

On the other side of spectrum there are movies that tread the same old formulae. They rely on a central heroic figure- larger than life,  master of all trades and with skills bordering on super natural abilities. The plot is an excuse to show off these capabilities of hero. Most of them bit the dust as audiences rejected them outright. One exception is the recent movies of Dileep, thanks to mindless comedy. But rarely a movie is made that reminds us the joy of watching a good story unfolding on screen with the help of competent direction and some decent acting. Drishyam, directed by Jithu Joseph is the recent example.

Drishyam is a movie that has a simple, realistic plot but provide wholesome entertainment. It is the story of an uneducated villager who stands against an oppressive system and beats them in their own game. Georgekutty, a cable tv operator has very little formal education, but is world wise. Thanks to his business, he has developed an addiction to movies and he uses it to solve everyday problems of his family and others around him. One fine day someone enters his family with the intention to destroy it and ends up dead. The rest of the movie deal with how Georgekutty prepare his family to face the consequences, fight and win.

Drishyam is directed by Jithu Joseph, who has made Memmories, a very decent thriller starring Prihviraj recently. With this one, he has definitely reached the next level. The movie starts very slowly. It takes its time building the characters and situations. Once its turning point is reached, it never turn back. Whatever we saw till then gets arranged like a jigsaw puzzle by the time movie climaxes. Drishyam does another service to movie goers. It makes us remember how good Mohanlal is, in portraying a character that has some depth and plants the feet on firm ground. Special mention to Shajon for his chilling performance as the antagonist. 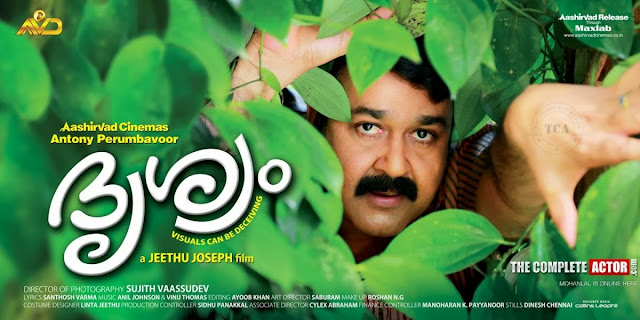 Labels: drishyam, malayalam, movie
Email ThisBlogThis!Share to TwitterShare to FacebookShare to Pinterest
Posted by Harish P I at 9:26 PM