My disinterest in sci-fi movies might have developed after watching a totally incomprehensible Star Trek movie in a theatre in Hubli when I was a teen ager. I sat through first hour without understanding a single shot of the movie (which was a first for me) and the second hour was passed by carefully observing the correlation between back ground score of the movie and the lights glowing on the space craft on screen, thanks to an observation by my friend while half time.

My only knowledge about Star Wars came from a couple of movie posters and trailers and for me these movies were always ‘the ones were dudes fight using tube lights’.  But now I know they are Siths and Jedis fighting with Light Sabers, thanks to two cute comic books that are a reimagining of Star Wars. After reading them back to back I used Wikipedia to find out more about the series and even watched a full movie till end, the one in which Luke Skywalker is revealed his true identity, that he is in fact the son of the much feared Darth Vader, the antagonist of the series.
Darth Vader and Son show a tired Vader raising his 10 year old son Luke. In 64 pages illustrator Jeffrey Brown fills humorous imagined situations that can arise. Vader’s Little Princess is a follow up book which shows the bonding between Vader and Princess Leia from her adolescent till she is a rebellious teen ager. Both books use several dialogues from movies into these situations creating hilarious moments.
Both these books are driven by a single line concept- showing a popular antagonist in very normal situations and inducing comedy. Writer has not bothered to go beyond this, but still these books are definitely worth a look, especially for fathers with young kids, who have grown up watching the Star Wars. 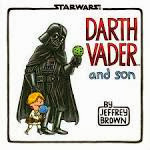