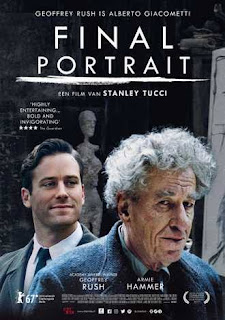 It seemed to be a great proposal. After all how much time does a gifted artist takes to make a simple portrait..? Probably just a single afternoon... That was what American critic James Lord thought when famous Swiss artist Alberto Giacometti asked him to pose for a portrait. But little did he knew that he was to participate in the chaos that a truly artistic process involves. The self doubting painter took his own sweet time and a ton of anguish and anxiety to everyone involved, to turn out a remarkable work of art. One of his best...

Final portrait, directed by Stanly Tucci, is an incredible true story of an off beat relationship between a rude, selfish and indulgent artist and his patient and passive model. If you are watching a movie and you are more interested in its plot, then I would not recommend this one. Instead there is a four minute video in YouTube that beautifully summarizes the whole thing. But if you are interested in a movie for something more than just a story, you long for an emotional experience, I would love to introduce Final Portrait.

This movie is about the artistic process and the whole trauma that comes with it. Giacometti is tormented, confused and is without any plan. He just want to show the world what he sees. He is not even sure if he has yet acquired skills to do it. He doubts his own abilities though the world has acknowledged his skills because he has enough money to throw around. In a fit of rage he can throw bundles at his wife. He can give so much money to the pimp of his muse that even the pimp declines him and says he has paid enough. Yet Giacometti is tormented as he is aware of his limitations.

Playing perfect foil to our artist is his model. Lord understands and even empathize with the struggle of Giacometti. He has a pressing need to go back to New York, yet has to postpone his tickets as he doesn't have any idea when his adventure will be ultimately over. He is surprised by the attitude and actions of the painter and feels apprehensive, but shows restraint on every occasion. He is passive and is herded many times by the more aggressive and dominant Giacometti. Yet he doesn't protest and takes it all with an all knowing smile.

The movie belongs to the two actors- Geoffrey Rush and Armie Hammer who plays the leads. They are very convincing. When I watched the YouTube video that I mentioned before, I was astonished how  perfectly they resembled the actual persons they played. Though to a casual viewer it may occur what is the necessity to stretch a thread bare plot to an hour and a half, the movie is rather an experience. It takes patience and some amount of empathy to appreciate this one...
Labels: Alberto Giacometti, art, movie, movies, paintings, true story
Email ThisBlogThis!Share to TwitterShare to FacebookShare to Pinterest
Posted by Harish P I at 5:05 PM 2 Comments 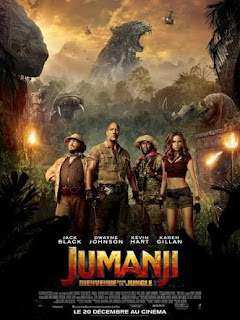 Jumanji was one of my favourite movies. It was funny and goofy and transported me to another world altogether. Every scene threw in a new surprise. And Robin Williams was amazing. When I heard they were remaking it, I had serious doubts. And then I heard Rock will appear in it with Jack Black. Still I had my doubts and gave upon it.

But when it released, it had a fresh rating from Rotten Tomatoes. So I decided to try it. And I feel it is exactly what it promised it to be- loads of fun. The makers were very successful in tapping the best out of all leading actors. The story is crazy, but kept me engaged. It was a wise move to make Jumanji a video game instead of a board game in the first part. Another good move was to make the whole movie set inside the jungle instead of being in the home like the first part. These re-touches made it different from the prequel and allowed to widen the canvas considerably.

The movie was largely dependent on the personalities of the main characters and they doesn't let it down. But it wasn't as magical as the first one.
Labels: comedy, English, humor, movie, movies, robin williams
Email ThisBlogThis!Share to TwitterShare to FacebookShare to Pinterest
Posted by Harish P I at 9:27 PM 0 Comments 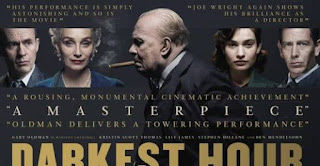 As an Indian, Churchill is no hero for me. The guy is an imperialist responsible for many atrocities like the Bangal Famine. His attitude towards Indians is condemnable. He forced Indian soldiers to fight for England and used Indian resources for the effect of war. There are many accounts of the valor of British soldiers in World War 2, but not much is heard about Indian soldiers who fought in the war and the Indian wealth used in fighting it. There is much for me to loathe him as deep as Hitler from an Indian view point.

Now, when I watch a movie made about Churchill, should I permit my bias to meddle with enjoying it? I am of the opinion that history is history, but when you make a fictional movie or write a novel by adapting an historical event, you should be ready to grant it a certain leeway for dramatic effect. Otherwise it is better to watch a documentary. 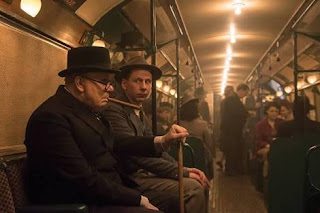 So when I sat to watch Darkest Hour, fully knowing the premise of it, I was all ready to watch it unbiased and take only the good things out of it. Darkest Hour is the story about Churchill's ascent to prime-ministership as a compromise candidate and how he manages to steer the opinion of his parliament and the public towards fighting Nazi threat instead of negotiating for peace.

The movie is mainly dialogue driven. But after finishing it, I had the effect of watching a thriller. There are no action sequences or battle scenes, and absolutely no suspense because we all are pretty aware how it turned out to be. But the rapid breathless pacing and the urgent atmosphere makes it feel like a thriller. Surprisingly, the movie has moments of humor and sentiment interspersed, which helps enormously in its enjoyment. 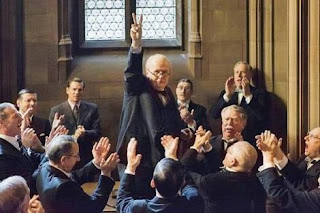 I had an issue with a scene were Churchill goes to public to ask their opinion. It was a sudden change of atmosphere and tone the movie was taking and so unbecoming of the man whom we saw till that moment. The scene doesn't seem probable and its depiction is also a bit unrealistic. I feel now that it was more like a dream that he had and not an actual happening though nothing in the movie substantiate my version.

Gary Oldman deserves his Academy Award for best actor for his characterisation of Churchill. To be using that much prosthetic and make up and still emote the subtlest nuances, is indeed great talent. He makes the man more endearing and human than his textbook depictions. I'm sure the sensitivity that his  Churchill displays in many scenes is a cinematic liberty to make us root for him. 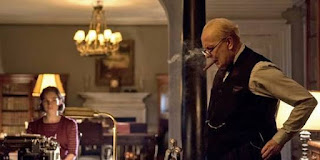 If you loved the Nolan movie Dunkirk, you will be glad to see a more wider historic look on it here. The movie is a companion piece to Dunkirk and provide necessary exposition that Nolan never bothers to provide us.
Labels: christapher nolan, English, history, movie, movies, war
Email ThisBlogThis!Share to TwitterShare to FacebookShare to Pinterest
Posted by Harish P I at 8:01 PM 0 Comments 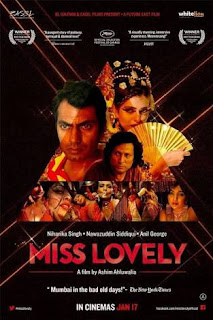 There are certain movies that makes you feel terrible and drained out and filthy. You desperately need a bath after watching them. They are unpleasant affairs, with difficult subjects and not ready to sugar coat their intentions... 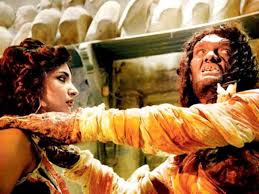 Miss Lovely is shot in a style and tone very similar to the cheap movies it is about. It contains very less exposition about its characters or their motives. It switches its genre effortlessly to crime thriller, noir, romance and an indulgent art movie. This switching of style can be a turn off for lot of viewers.

Miss Lovely is not a movie for all. It needs a certain tolerance and understanding of art to fully appreciate it... and lot of patience.
Labels: hindi, movie, movies
Email ThisBlogThis!Share to TwitterShare to FacebookShare to Pinterest
Posted by Harish P I at 10:03 PM 0 Comments 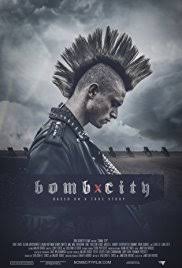 Human beings, in a historic perspective, always had difficulty in appreciating someone different from them. Those with different color, language, religion, political ideology or even sexual orientation are always looked upon with suspicion and even hate. Things are slowly getting better with passing time and these days generally we see that, being at least tolerant with the different other is a value that is held in a high pedestal.

One reason for this change is the more globalised world where distances are getting reduced with advancement in technology. Also, in the emerging consumerist world, it is always beneficial for all to keep the bridges open and promote more give and take of ideas, technology and wealth. Another contributing factor is the thought processes of people that is generally getting more and more radical, because of the wealth of information and knowledge available at their disposal compared to earlier periods of history. 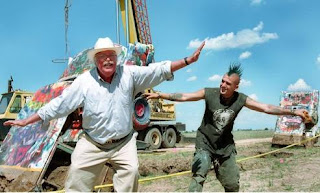 Still we see cases where primitive hatred and suspicion of someone, clouding the judgement and causing acts of intolerance against others who doesn't subscribe to their views. Hate crimes still happens all around the world. Bomb City is a movie about one such crime, a true story that happened in Amarillo, Texas, where a young punk singer was killed during a brawl, overrun deliberately by a speeding car, driven by another teenager, someone with better approval from community, because he's an active athlete and conforms to societal norms.

For me the more painful part was that the killer was acquitted by the jury, who comprised of individuals who looked down on the rebellious attitude and dressing style of punk kids. They refused to consider the evidences and testimonials that established beyond any doubts that it was a deliberate murder. It seems that the whole community took part in the murder, as they looked down upon a bunch of kids who adopted a different lifestyle choice other than theirs.

Bomb City seems deliberately manipulative at times, by trying to force the goodness of its protagonist into our throats consistently. It plays out like a propaganda sometimes. But even if we overlook it, it is evident that the point the movie makes is valid. This is a movie that forces you to think deeply about the world with all its differences.
Labels: crime, current affairs, movie, movies
Email ThisBlogThis!Share to TwitterShare to FacebookShare to Pinterest
Posted by Harish P I at 6:54 PM 0 Comments
Older Posts Home
Subscribe to: Posts (Atom)