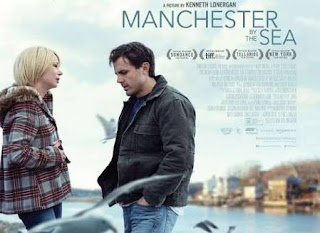 Manchester by the Sea is nominated for Oscars. I would love if it wins one for the best picture. Actually I would love if Silence wins, but as I told before, its the Blade Runner of 2016. And it's not even nominated. Coming back to Manchester By The Sea, I don't think it'll win the best picture award. It doesn't have any narrative gimmicks, no social realistic theme and not even an existential conflict. It just has a protagonist who let his chances of redemption pass. So the award jury too probably will give it a pass.

But that doesn't make it any lesser movie than the one that is going to end up winning it (La La Land?). It is a very personal story about a man who lost everything once and is not interested in rebuilding it. He passes all the chances of redemption that the life throws at his way. Casey Affleck shines in a career defining role and gets full support from a perfect script, the director and all the supporting cast.
Email ThisBlogThis!Share to TwitterShare to FacebookShare to Pinterest
Posted by Harish P I at 6:12 PM