All That Man Is by David Szalay: A Warm Portrayal of Male Psyche 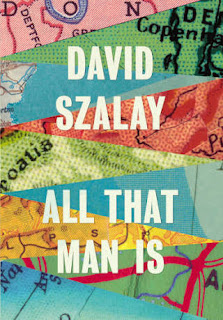 All That Man Is is written by David Szalay and was short listed for Man Booker prize 2016. Though it is listed as a novel, it is actually a collection of nine stories with many recurring elements and themes. Basically it is a portrayal of manhood through specimens of nine European men of different ages and at diverse stages of life.

The book starts with the story about Simon, a young introvert British teenager, sightseeing in Berlin along with his friend. It ends with the story of his knighted grandfather Tony who is seventy three and recuperating from surgery. In between there are diverse stories about men of many ages and social status facing testing life situations where either love, money or in most cases both are at stake.

All the protagonists are invariably flawed men in humiliating circumstances, mostly of their own making. Some are indifferent, some are with bloated egos and most of them totally break down. The stories are pretty bleak, but told with a very mild dose of humor and with much sympathy. They are so realistic that they have the potential to be case studies of psychologists.

All nine stories feature their protagonists in international journeys- some of them holidays, some personal errands and some business trips. Invariably while they are in a foreign situation, they face an issue where a tough choice has to be taken which can affect their life. The stakes- sex, love, money, job, assets and ultimately life- build up as the age goes up. The book is an existential comedy.