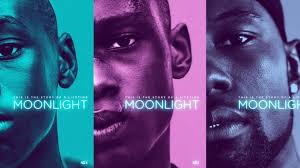 Imagine a movie that's simple, delicate and very life-like. Moonlight is that movie. Its a very sincere film about the growing up of a shy, introvert, bullied boy into a tough nut. It's about identifying oneself in an unforgiving world. It's about choices that you take in life and how they work in your transitions. It's also about relations, friendship and love.


The movie depicts three stages from the life of Chiron, a black kid living with an abusive and possessive mother. The first part titled Little, deals with bullied Chiron's budding relation with a drug dealer who tries to fill the gap of a father figure. Second part is titled Chiron and here we see a teenaged boy trying to come in terms with social pressure, parental neglect, budding sexuality and betrayal.

Third part titled Black, features a transformed Chiron who has become a drug boss like his mentor from the first segment. He tries to bring some sanity to the troubled relationship with his mother. Also he attempts to rekindle his one-kiss relation with his friend Kevin who calls him after a decade. But for that he has to resolve the issue of a betrayal.


The best thing about the movie is the characterisation of Chiron. Though three different actors portrayed him in three segments, all of them succeeds in bringing a surprising consistency to the character. It is well evident in the third segment in which he physically looks menacing and beefed up, but displays deep down the same vulnerability as in previous parts. The supporting actors were also fabulous.


The movie is filmed in a very sober manner, with minimum exposition. It follows a natural flow that is so rare to see these days. It reminded me of the movie Fruitvale Station that I saw some time back. It was about the wrongful killing of a black man by police. Though it was a sharp social movie exploring racial tensions and this one is a mellow psychological drama, the focus of both movies was on realism. There was a sincerity in both attempts.

I loved that the three parts of the movie were titled by the names that different people call the protagonist. Each title when looked back, makes complete sense and gives precious insights about his behaviours in that segment. Probably Moonlight is the best movie that I watched recently. It's sincere, beautiful and universally significant.