Parenting is one unique behavior that separates us from other animals. While for other animals raising their young is just an instinct, for humans it is more than that. For us it is much more complex. Parenting is one way in which we instill principles in our next generation. For any particular species of animal there is only one way to do it, but among humans, the technique and the outcome vary individually. It has evolved as an art form. Raising kids, developing them to their full potential and making them succeed in their lives is any parent’s ambition. But then, the success level is varied. There is no secret formula to raise a kid. As every kid is unique, parenting style also should be unique. Raising Supaman by Nathaniel A. Turner J. D. is a book trying to provide some help to the parents out there sweating, in realizing their dream of raising a successful child.

Raising Supaman is a collection of letters from the writer addressed to his son Naeem. He started these letters from when his kid crossed adolescent and ends towards the end of his teens. All the letters invariably address the issues the kid is facing while coming of age and are intended to motivate him in facing the challenges and obstacles on his way to success. But what makes each letter stand out on its own, is the varying context. Each letter has in its concern a different struggle that the kid has to come over in his everyday life. Added to these concerns is the father’s own emotional turmoil, his struggle in finding out what is good for the kid and his introspection to find out where he stands and what correction he has to do. The beauty of these letters is the story that it tells, that of a kid who aims for the stars and has the persistence to reach there, thanks to the overall support from his loving father.

When I chose this book after seeing the title and cover graphics, I felt it is going to be a humorous read. Unfortunately the case wasn’t so and I will not deny that this factor has hampered my enjoying this book to a small extent. Yet I enjoyed the sincerity in the language of these letters, the conviction that the Dad has on his son and the motivating tone his prose has. The book tries to emphasize the power of written word over verbal advises in parenting. I feel the writer has a point in it, because written word does not have the emotional baggage that follows a spoken word, which most of the time dilute the intended effect. Another factor is the longevity of letters.

Raising Supaman can be beneficial for parents as it provide them a path to reach out to their kids- that of writing letters. It is useful for kids as most of the issues they face while growing up are addressed in this book. 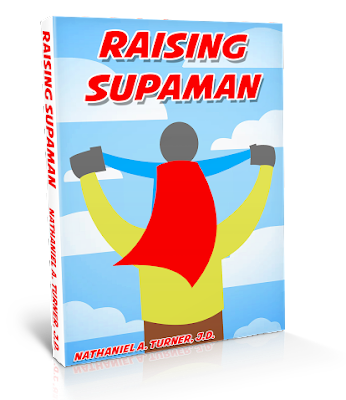 Labels: book, books, review
Email ThisBlogThis!Share to TwitterShare to FacebookShare to Pinterest
Posted by Harish P I at 8:20 PM