The best political novel that I read is First Among Equals by Jeffrey Archer. It told a story spanning decades about the rise of three competing politicians from diverse backgrounds and of different ideological positions and its masterstroke was the suspense that broke only in its last sentence. The awesomeness of that novel is the reason why I keep that as a benchmark when I read anything in the genre. Tabrik C has attempted a political thriller to start his writing career. As soon as I read the synopsis of this book on BlogAdda, I was interested to know what dimensions can an author who is also a perfumer, an entrepreneur and a political enthusiast, bring to the table.

Prisoner Jailor Prime Minister tells the story of Siddhartha Tagore, a music prodigy and Harvard educated heir of a senior politician who enters the arena of murky politics. The novel starts when a mysterious person enters Indian territory through Pakistan and plants a nuclear bomb in Pokhran on December 31st 2016, the day Siddhartha is elected to the Prime Minister's office. Causing head ache to the newly elected Prime Minister, one side is the Jehadi nuclear threat and on other side is the internal revolt by opposition leader Rukmani Devi, an economist and a Nobel laureate who wants to alter Constitution. Reader is then exposed to his past- a past of hidden secrets, bruised egos, reckless living, his relation with his love Ruby and her twin sister Karisma.

The story is told in alternating first person and third person narrative. First person narration is through the eyes of Siddhartha and wherever he is not present, it is in third person. Also the novel uses a non linear time frame. Novel starts in 2017 and alternates between then and as back as 1986. These techniques, changing narrators and alternating time frame is, I feel becoming a norm in Indian English writing. In the case of this book, they definitely help in getting into the genius but deranged mind of the protagonist, which is essential in identifying with him. It also help to keep the suspense built up. The book cover is designed in line with its mood- dark, sinister and ominous.

Tabrik has succeeded in writing a book that is immensely readable. The characterisation is a high light of this début novel and it is really satisfying to read about a bunch of people who are as crazy as nuts but relatable to the core. The passion that has went into creating them, not only the significant ones like Siddhartha, Ruby or Karisma, but even the relatively minor characters like Vikram and Shanti Jaykar is commendable. I loved the parts were Siddhartha shows off his Mozart Man psyche. His sudden transformation and behavioural pattern are depicted very well. There were a couple of places were the narrative plunged into cheesy, even little bit silly situations, but I feel those can be overlooked.

As a political novel, I expected a bit more politics in it. The ideological differences, power games, confrontation of national issues and conspiracies that are an integral part of the genre are given a toss, preferring to concentrate on more personal affairs. That definitely is an opportunity lost as the present Indian political scene muddled with serious issues of cross border terrorism, corruption, favouritism and regionalism could have provided ample potential for a great thriller.

Prisoner Jailor Prime Minister is a good debut novel inhabited with many complex characters and tells a good story. The author can be proud of it. Hope the next time he writes one which is more insightful about Indian political scene. 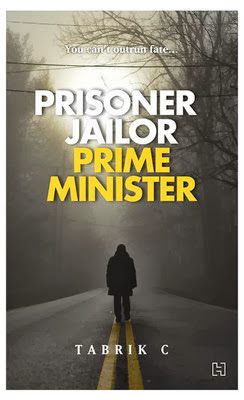 Labels: book, book review, books, politics
Email ThisBlogThis!Share to TwitterShare to FacebookShare to Pinterest
Posted by Harish P I at 9:02 AM