War is a human situation that started with the beginning of our race. At any point of time there is a war waging on one or the other part of our planet, bringing destruction and endless sufferings to millions of people- soldiers and civilians alike. If it causes such irreversible damages, why not stop engaging in it? Why not give peace a chance?  There are many antiwar thoughts going on in the world, coming out as literature, movements, as artwork and in many other forms. But war continues, unstopping, as a reality. In his brilliant novel Holy War, Mike Bond tries to answer these questions and more.

Neill is an American journalist, staying in London, with a family life on the verge of collapse. Need for money makes him to take up an assignment for MI6, getting Lebanese Hezbollah leader Mohammad interviewed in war torn Beirut city. The catch is that in order to get the money, Neill has to wear a GPS chip in his body revealing Mohammad’s position to Neill’s employers. Mohammad is the charismatic Hezbollah leader who is slowly warming up to the idea of everlasting peace between warring factions in the city. Rosa is a Palestinian woman who can go to any length for exacting revenge on Israel. Andre is the brother of a French Para soldier who dies in a suicide attack. He wants Mohammad, who he feels is responsible, to die and with the intention of killing Mohammad enters Beirut defying his seniors. The novel deals with their intermingling paths and the quest for an elusive peace.

Holy War is a stunning book. Mike Bond succeeds in taking the reader to the places were real war happens through the strength of his writing. The violence and underlying tension that builds up throughout this novel is enough to knock the sense out of the reader. On the top of that, it involves some intriguing characters, three dimensional and real. All the characters are written in such a way that, reader always feels there is much more to them than what meet the eyes. Through them the writer makes a statement of strong impact that condemns mutual destruction for the purpose of ego-boosting. Also commendable is the fact that, he never takes sides and maintains a balance between characters that make them more believable and the writing more authentic. It succeeds in making the reader think deep into themselves and come to a conclusion about the folly of war without doing any preaching.

Holy War is a must read book, that can stimulate our mind and soul. Don’t hop in for any cheap thrills, try it for the introspection mode that this book can put your mind into. Expect lot of explicit violence and sex. 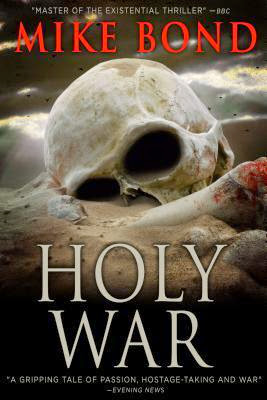 Labels: book
Email ThisBlogThis!Share to TwitterShare to FacebookShare to Pinterest
Posted by Harish P I at 7:00 PM