I know now it is late to put a post on Bangalore Days. The movie released 2 months back, received much acclaim and has turned out to be a massive success. I watched it only last week. Quite a lot is written about it in various media by now, so I am not attempting to write about the brilliant direction or fantastic acting, which most of the readers are already aware of by now. Let me just point out one aspect of the movie that I felt makes it significant- its depiction of an average Malayalee.

It was in mid-eighties that an average Malayalee became integral part of Malayalam movies. Before that he was present as a character, but the movies were not much about him. Social and political movies prior to eighties were more about social changes and optimism. Most of them had leftist leaning. Family dramas and romances mostly had members from upperclass as characters, with those from lower strata entering to create conflict, as a plot device. Other genre of movies that ruled box office were Vadakkan Pattu martial arts dramas filmed with much incompetence and devoid of any local flavor of North Kerala were it was supposed to happen.

Eighties saw a sudden change in society. Agriculture, the back bone of economy, started its slow decline, causing the youth to think of an alternative. Securing a government job became a dream. Educational reforms created lot of young persons armed with a certificate, but not able to achieve the economic greatness it was supposed to bring, mainly due to the lack of opportunities. People started their massive exodus out of the state in search of greener pastures. All these factors populated a layer of society whom we termed middle class. Eighties projected them as the average Malayalee.

Depiction of a perfect specimen of an average Malayalee was probably done by Sathyan Anthikkad in his movies with Mohanlal. They were highly successful as people were able to relate to the daily struggles the protagonist- whose ambition invariably was to reach the upper class and his biggest fear,  getting demoted to the lower. Srinivasan, I feel is the bridge that connected social, political and family lives of the cinematic average Malayalee through his scripts and movies that were actually mirrors turned on the Malayalee psyche.

This went on till the mid-nineties. Several other film makers and actors joined the bandwagon and successfully explored (and exploited to some extend) the mind of average Malayalee. Mukesh and Jayaram became second level brigades of Mohanlal and Srinivasan. Kamal and Priyadarsan armed with scripts by Lohithadas treaded the path. In mid-nineties thanks to globalization and exposure to the wind from outside world, the average Malayalee slowly changed. His social outlook changed, his political views changed (the opening scene of Bangalore Days hints exactly on this), his ideological inclinations changed and his way of living changed. Film makers never got this; they tried to continue making stories about the same character they were familiar with. Slowly it became a non-profitable venture- making movies on the average Malayalee and the genre died a natural death. In its place were substituted mimicry comedies, action and political thrillers about crusaders and feel good romantic dramas.

If we check Bangalore Days, we can see that it is a movie that puts an average Malayalee back on the spotlight. It deals with three youngsters, cousins, who struggle to find their destiny in the competitive world. Here the makers of the movie are successful in portraying the mind set of Malayalee perfectly- not the Malayalee of eighties or nineties, but that of 2014. Getting a job or settling in life is not a struggle for them. (It is for their parents though, who are offspring of the eighties).

The character of Nivin Polly is nostalgic about his village, is an innocent sort of guy who fantasies marrying a traditional girl. But when circumstances calls, he has the practical mindset to retract from all these and choose what is good for him. The character of Nazriya, a bubbly and playful girl, is forced for an arranged marriage. Though she is dissatisfied, she displays the maturity to put her foot down and give wings to her ambitions, at the same time rebuilding her family.  The character of Dulqar is a rebel, a product of tumultuous family life created by the society of eighties. His wild nature subsides when channeled to the race tracks thanks to his coach and a lady love. They are essentially different from the protagonists of previous movies, but at the same time are truthful portraits of today’s youth.

Bangalore Days is significant because it succeeds in creating a realistic portrayal of average Malyalee, depicting their altered social, economic and family lives, without compromising in its entertainment value, something our filmmakers has not done from last two decades. 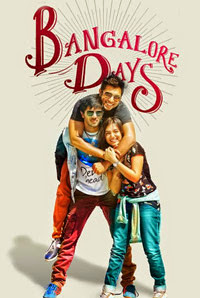 Labels: movie, movies
Email ThisBlogThis!Share to TwitterShare to FacebookShare to Pinterest
Posted by Harish P I at 1:56 AM