Dongri to Dubai: Six Decades of the Mumbai Mafia by S.Hussain Zaidi

The underworld of Mumbai and its modus operandi are familiar to people outside Mumbai through newspaper reports, crime features in media and many gangster flicks churned out regularly by Bollywood and other film industries of the subcontinent. Dongri to Dubai is an attempt by veteran crime reporter Hussain Zaidi to chronicle the birth and rise of the monster that is Mumbai mafia in the past six decades. As the key player of the game is Dawood Ibrahim, it is just natural that his story occupies the major portion of the book. Even the title mentions his rise from a small time law breaker in Dongri to the kingpin of an international enterprise indulging in several illegal activities with its pivot in Dubai and its tentacles spread world over.

The book starts with a telephone interview that the writer had with Dawood, which in itself is a rarity and a priceless scoop as the Don is rather reluctant to come out in public after the infamous blasts. Even any of his recent photographs are not available in the public domain. The story then go back to pre-independance years and describe the formation of several small gangs operated by immigrants from North India. After detailing the plight of many minor gangsters and their eventual fading into oblivion, caused by fighting among themselves or by the long hands of law, we read about the rise of one man who is responsible for the first criminal empire in Mumbai- Haji Mustan. Mustan, who used to be a coolie on the docks, took up smuggling for the extra monetary benefits. Soon he built links with Gulf countries and graduated to an established gold smuggler. The other two gangsters who joined hands with Mustan to form a troika of money, muscles and network were Varadarajan Mudaliar, the South Indian illegal hooch king and Karim Lala, the powerful leader of Pathan gang.

Ibrahim Kaskar was a police constable who maintained good relation with all major gangsters. His son Dawood clashed with Pathan gang and was aided by Bombay Police to form his own gang and quash the Pathan power. Police wanted to use Dawood for their own aid, but he had other plans and was using police support for his own benefit. Soon gang wars raged on the streets and Dawood emerged the lone survivor, sidelining even Mustan and Karim Lala. After the Bombay blasts, Dawood and his aides had to leave India. Still his clout was maintained and Mumbai mafia was remote controlled from Dubai. Fallout between Dawood and Chhota Rajan, how Dawood ended up in Karachi and the relationship of Bollywood and D company are the other major episodes in the drama.

Dongri to Dubai has an exhaustive subject scope with lot of details. The writer should be given full credit for exploring it with such passion and vigour. He covers a lot of ground and yet manages never to bore or confuse the reader throughout the narrative. The language of street with liberal sprinkling of expletives adds the authenticity. For those of us who are aware of many incidents and characters described in the book, it serve as kind of a solved fill in the blanks puzzle. The revelation of motives and hidden agendas behind incidents that are embedded in psyche through newspaper reports (like the attempt on Chotta Rajan's life or Chotta Shakeel's innings in Bollywood that ended in a debacle) were interesting to say the least.

One issue that I had with the book is its attempt to sensationalise the issues. The description sometimes descends to tabloid quality. Also the human angle is never presented, causing the narrative to never rise above the level of a nineties Bollywood revenge thriller. Also the writer describe the links between mafia and film industry in length, but surprisingly is quiet about its connection with cricket. Nowhere the name of a cricket player is mentioned. Inspite of these, Dongri to Dubai is a wonderful book. It serves as a compelling and necessary read for all, as terrorism and mafia is engulfing our ordinary lives in many different ways. For example it was shocking for me to realize that the profit from selling of pirated DVDs in the subcontinent is used for funding terrorism! No more grey market DVDs for me. 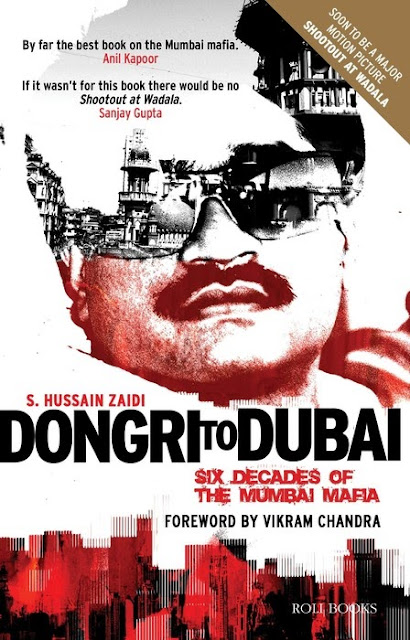 Labels: book, books
Email ThisBlogThis!Share to TwitterShare to FacebookShare to Pinterest
Posted by Harish P I at 7:30 PM