If Intentions Could Make Classics...

This review of three books are pending from some time. I received them at least a month back, after replying to the mail from Mr Santosh Avvannavar, requesting an objective review. All three are very short reads, the longest one falling short of 130 pages. My first impulse was to go for three consecutive review posts, one for each book. But after reading all three, I felt it would be well to make a single post. All three books has many similar characteristics, that even if one combine the three into one book, the effect will be much the same.

I would begin with the best of the three. Black, Grey and White has an intriguing title and a pretty great cover. The book, co-written by Santosh Avvannavar and Santosh I Biradar, claims to be written for the purpose of spreading awareness on AIDS, thereby creating an opportunity for public to unite in fighting against it. The title alludes to three ages of human life- young, middle and old, and that nobody is spared by this menace. The book contains five fictional stories, the base of which are obviously true accounts. The first story Shahid- The Martyr, is about the spread of myths and superstitions in society related to curing of AIDS and how innocents fall prey for it. The second story Chintu; The Earth Is Round is about the plight of innocent orphan kids affected by AIDS, due to their parents and the outlook of society towards them. A Game of Life, Lust and Death is about a model who uses her disease to exact revenge on the sex racket who spoiled her sister. Highway Sex a story about rampant spread of AIDS through highway drivers and the effect on their families. Last story Abram & His Prodigal Son is a take on the biblical story into modern times.

The second book Title is Untitled, co-authored by Santosh Avvannavar, Kundan Srivastava and Raghunath Babu Are, takes on some important social issues plaguing our society- rape, trafficking, child marriage and such. The unusual title of the book has a reason- it points out how the victims always lose their titles and eventually becomes untitled entities. Compared to the first book, the premise of the stories and their tone has good variation in this volume. It has eleven stories, each one pinpointing one social evil. Each of the stories work as case studies and provides some insight for the reader.

Third book Surrogate Author, co-authored by Santosh Avvannavar and Shilpa Patil, is intended as a satire. It is a parody of the classic romance Devdas. It is the story of Authdas, an aspiring writer struggling to complete his first book Paru. His failure, caused due to the pressure for pursuing a career in Engineering, exerted by his parents, 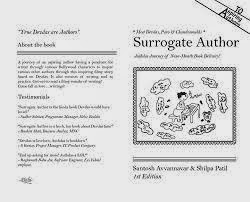 results in heartbreak and his meeting with poet- prostitute Chandramukhi. Surrogate Author is thankfully a very short book, just 30 pages, though even in its shortness it is drag. It terribly fails to convey anything worthy to the readers who invests their time on it and in turn adds to their confusion.

I liked the first two books for their intention- a very noble one indeed, of making readers aware of several evils in society. But in general, I feel they deserved much better writing. I am afraid to say that I did not like the playbook like conversational structure in them that fails totally in building premise and character to the stories. A regular story structure could be much more effective, as is seen in the story about Chintu. Severe grammatical and spelling errors hampers the reading pleasure. Also playing spoilsport is several repetitions- of words, phrases, total sentences and even situations in the narratives. These books are to be edited seriously..!

I appreciate the intention behind the books- it is a commendable effort. But for it to be effective and worthwhile, I feel some serious correction work is due. Because only good intentions never make classics.