Some time back I had got a chance to review Business Sutra by mythologist Devdutt Pattanaik. It was about conducting business using ancient Indian principles of yagna. The book had a great concept and was mind blowing. So when Blogadda offered a chance to review his latest book, 7 Secrets of Goddesses, I was eager. This book is part of Pattanaik's 7 Secrets series and is the forth entry of it. The book tries to find out the gender definition in Indian mythology by analysing the important role that the Goddesses play in it. It deals with prominent goddesses recurring in mythology, what functions they perform in the bigger context and how history has constantly played a role in changing these aspects according to the social norms.

The book is divided into seven chapters, each one detailing the mythology of one Goddess. The first chapter Gaia's Secret, is about Greek earth mother who, though respected, slowly gets marginalized. This is explained by the lose of freedom that women experienced due to a shift to patriarchal system. Several other myths from other parts of the world tells a similar story. Also important to note is the decline in the sexual choice of women due to the concept of ownership of women by men. Kali's Secret portrays Kali as the raw nature that is indifferent to the man's attempt to conquer it. Third chapter Gauri's Secret is about culture that happen due to human interference in raw nature.

Durga stand in between nature and culture, ensuring the balance. Durga's Secret is about this ferocious but kind Goddess who create fear  in man so as to prevent exploitation of nature and at the same time protect men from the punishment of nature. Lakshmi's Secret is about the Goddess of wealth who is essential to liberate men from perils of poverty. Saraswati's Secret is about the Goddess of knowledge and language. She is mostly shown aloof, calm and composed. She is responsible for the expansion of human imagination. The last chapter Vitthai's Secret is about a form of Krishna that is feminine. In this chapter author tries to analyse several instances in Indian mythology were the boundaries of gender is obliterated. It asserts that worship of God without Goddess is impossible, but Goddess can be worshipped alone.

7 Secrets of Goddess is an important book that brings to forefront the role of Goddess in otherwise male dominated mythology. The book grab eyeballs due to a wealth of picures- calendar arts, paintings, photographs of sculptures and idols, which help the reader to comprehend a explanation rich narrative. What is fantastic is that instead of literally or metaphorically assessing Indian mythology, like Islamic invaders or British colonists or several recent Indologists (who by the way cannot think an inch beyond sex when confronted with a phallus symbol or a naked goddess), Pattanaik goes for a deeper psychological approach. To his credit, he comes out with a convincing portrayal of a culture that had no inhibition in acknowledging the presence of suffering in the world, a culture that could accomodate light and darkness, pleasure and suffering, good and bad, equally. 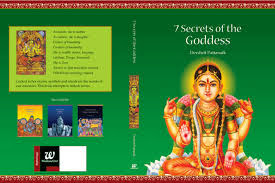 Labels: blogadda reviews, book, book review, books, mythology
Email ThisBlogThis!Share to TwitterShare to FacebookShare to Pinterest
Posted by Harish P I at 12:17 AM