Before watching Non-Stop, the latest of the action flicks starring aged Liam Neeson that Hollywood is regularly churning out recently, I had seen enough bad reviews for it. One reason why critics panned the movie was due to its similarities with previous Liam Neeson movies- Taken and others. Other than that, it is the usual issues with action movies, not having enough logic binding the plot, silly characterization and such.  As I don’t have any issues with generic movies and I don’t expect any Oscar worthy qualities from action movies, I jumped in to watch it.

Non-Stop has Liam Neeson as an alcoholic, but good-intentioned Air Marshal, who gets a message in his phone, which has a secured network, during his flight that if an obscene amount is not transferred to a bank account, every 20 minutes one person will die. Soon he realizes that the threat is real when people start dying around him in that interval. His fellow passengers infer that he himself is the culprit as circumstantial evidences point towards him. Even on ground he is implicated as the bank account to which money has to be transferred is in his name. Neeson has to find out the actual culprit, diffuse a ticking time bomb, save the plane and prevent any more killings and all these confronting a horde of irate passengers.

I loved the movie. It starts with a good concept and builds on it. Thrills are pretty good. After a long time I am watching an action movie that does not entirely depend on elaborate set pieces made by computer generated effects. The biggest draw is Liam Neeson, who looks his part and executes it brilliantly. His acting was integral in making me forget or overlook the inconsistencies spread throughout the entire film. Julianne Moore as a fellow suspect and potential romantic interest ably supports him. Other characters do not rise above B movie level as they are not given any scope for that. The climax was a bit of a letdown for me. It was satisfying while watching, but later when I thought about it, it felt lousy. I would say it was somewhere in between Con Air and Speed2: Cruise Control.

Watch Non-Stop for an earnest and very talented Liam Neeson and also for good thrills.  It is good entertainment. 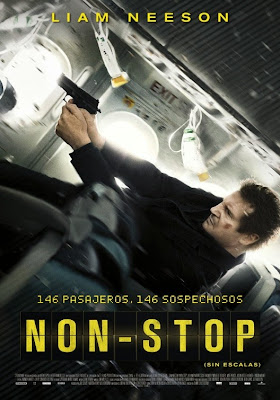 Labels: Liam Neeson, movie, movies
Email ThisBlogThis!Share to TwitterShare to FacebookShare to Pinterest
Posted by Harish P I at 12:52 AM