Book Review: The Birth of Korean Cool by Euny Hong

One recent phenomenon that shook the world was the sudden emergence of singer Psy with his viral hit song Gangnam Style into the much crowded international pop scene, changing the rules of the game overnight. The crazy song and its video became the most watched one in YouTube. It exposed the world to South Korea. If we carefully think back, we can realize that the entry of Korea into our lives was very recent. A few years back there opened a couple of Korean restaurants in cities; all of us started buying Samsung smart phones, Korean movies were a staple in Film Festivals and slowly we Indians are coming to know about Korean culture. But all this is just the tip of the iceberg and there is more, or so says Euny Hong, who wrote the book The Birth of Korean Cool, which tries to dig out more on Korean pop or K-pop as they term it.

Euny Hong, who was born and spent her childhood in US, doesn't have any great memories about South Korea. She had a difficult time adjusting to the country, its culture and traditions when her family returned back. Korea was not at all cool for her. Then, suddenly, within a decade, things changed. Korea became a cool place to be. It became the tastemaker of Asia. It influenced the sensibilities of many developing nations in Middle East and Africa. Now Korea is on its way to make its mark on Europe and America. All these it achieved by exporting its pop culture, which was almost nonexistent till then. Hong tries to find out how the transition happened and what the future holds for Korea and the world, with the unbiased eyes of an outsider in this remarkable book, The Birth of Korean Cool.

After the Korean War, South Korea was bankrupt and was surviving with the monetary help from the IMF. There was no much scope for a quick revival because the manufacturing sector was in tatters. The Government decided on a unique plan- exporting its national culture to the outside world. Like US manufactured a feel of desirability around its products, South Korean Government decided to make and export products for international entertainment market. Their target was developing nations which have the potential to be rich, so that when they reach there, they will be loyal to Korean products.  Korean Government and industry aligned themselves to this goal and gradually developed a network which made products- video games, movies, music, videos and junk food, appealing to international markets and distribute them. Thus K-pop came into prominence.

The Birth of Korean Cool is an amazing read. It describes a fairy tale economic rags- to- riches story of how a small nation with enough will power and ingenious thought process could develop itself into a formidable soft power in entertainment sector. It tells us how a small paradigm shift can trigger a movement that can alter the world history. Its sincere and matter of fact narration laced with occasional self-deprecating wit makes the book all the more appealing. 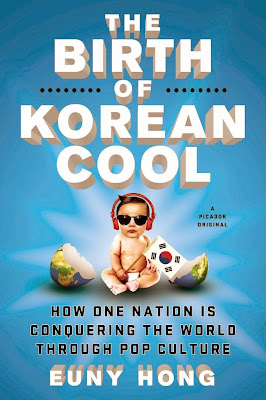 Labels: book, book review, books, current affairs
Email ThisBlogThis!Share to TwitterShare to FacebookShare to Pinterest
Posted by Harish P I at 2:55 AM