There was a time when Indian English writing used to be considered elitist, with only urban elite consuming them and themes that were related and interesting to upper class of society. A considerable change happened after Chetan Bhagath entered the arena. Many authors like Anurag Mathur had paved the way before, but Bhagath, armed with subjects appealing to middle class youth and simple story telling method without gimmicks caused a huge change. The affordable pricing of his books was another factor that contributed to his popularity. From just a popular author, he went on to become an icon of Indian youth. Chetan Bhagath's success caused an avalanche of aspiring novelists in market, with varying degrees of success. Some of them could emulate his success, but many misinterpreted his success formula and fell along the way. Beaten by Bhagath! A Tale of Two Writers by S V Divvaakar is a novel about such an author.

Beaten by Bhagath! is the story of BB, who is suggested by his beautiful lady boss to try his hand on fiction writing as she felt he can write much better than the Bhagath guy, Ketan Bhagath or K10 as his good friends call him. She never knew K10 used to be the best buddy and room mate of BB and both took part in many adventures together in college days. BB inspired by her words starts writing a novel with the sole intention of beating Ketan in his game. The writing of the book, struggles to get it published and attempts to make it a best seller takes toll on his life. Slowly his family life, career and financial position takes a beating. Will BB finally succeed in his attempt or will he be beaten again by Bhagath? Find it out by reading this delightful book.

I had seen this book in many book stalls and I felt it was a humorous take on novel writing judging its title and cover. But though it has a strong undercurrent of humor in it, the core is not humorous. The story concentrates on the book writing and publishing process in India. It may serve as a practical guide of sorts for new and aspiring writers. Most of the challenges faced by new writers is detailed in this novel- balancing family life while writing, handling criticism and disinterest by friends and family, finding a publisher, getting a celebrity for book launch, promoting it, dodging frauds and letting it go once it is decided a failure, to move on with life.

Beaten by Bhagath is an easy to read book, just less than 200 pages and is written in simple prose. The book is tagged as reality fiction. Narration is very realistic for most of the parts but turns a bit like a fantasy towards the climax. As I told earlier, there is a touch of black comedy throughout the plot. Though most part of the story is tragic, the author makes sure that he does not emphasize too much on it to make the reader depressed. I would recommend this book for all and especially for aspiring writers (well, who are not these days). 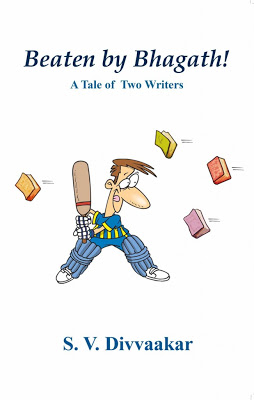 Labels: beaten by bhagath, book, book review, books
Email ThisBlogThis!Share to TwitterShare to FacebookShare to Pinterest
Posted by Harish P I at 9:51 PM