Damned: In Hell for an Eternity 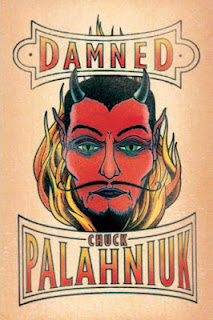 When I read Fight Club, the first novel by Chuck Palahniuk, I felt that it was one smart modern novel. It entertains like a thriller, there is a superb climatic twist, and it makes one wonder about existence making it a worthwhile read for the time spent on it. That was the reason I picked up his latest novel titled Damned with much expectation. Damned, also like Fight club, is an irreverent take on the world but told with more humor and satire. It entertains as well as makes the reader think deeply about several small follies of our existence that we conveniently push below the rug.

Damned tells the story of a dead thirteen year old girl condemned to live in hell for an eternity. Spencer Madison is the child of a movie producer and an actress. Her parents travels around the world making movies and professing the green way of life and adopting poor kids from third world nations (no prize for guessing who they are!) . The novel starts when Madison wakes up in hell inside a cage. She supposes that she is dead due to marijuana overdose and that is why she ended up there. She befriends people around her, starts getting adjusted to the life there and ultimately becomes a popular figure there by acting as a bridge between living and dead. In between there are reminiscences about her life before death, her relation with her parents, classmates and her adopted brother Goran.

Though the novel deals with death and afterlife world, it is no way dark or depressing. Spencer Madison starts her life in hell as a teenager confused about her identity, frustrated about her death and irritated about abandoning her hopes. Every chapter starts with an address to Satan, where Spencer Madison introduces herself to Satan. It is actually a spoof of some teen novel where the girl speaks to God about her personal issues and problems.  But as the novel progress, she finds out that even in hell hope can still work. There are several ironic observations about life coming through Madison’s observations. Its irreverent sarcasm works in the favor of the novel, though at some points the story becomes dull and repetitive. Overall this novel will amuse if you do not have a problem with some obscenity included in it. But still it is a long way away from Fight Club.
Labels: books, Chuck Palahniuk, Fight Club
Email ThisBlogThis!Share to TwitterShare to FacebookShare to Pinterest
Posted by Harish P I at 1:00 PM