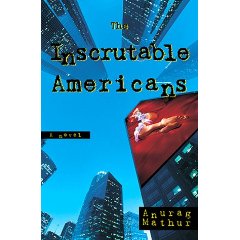 ... but got fizzled later. I have a bad habit of reading first page and selecting  novels, especially of those writers, whom I have never tried before. It has yielded disastrous effects many times. And two novels that I read in recent times are good examples. These two novels are humorous and the starting was so good that I expected the whole novel to be as great as that one page. I got a bad feeling after some time, but continued reading thinking that things will get better. Alas, that was not the case. First of these books is a best seller, a book so famous that many wannabe writers felt after reading it that novel writing in Indian English is a cake walk. A misconception, the troubles of which we are still suffering through numerous supposedly humorous books endorsing the book shelves in major book stalls. Second one did not cause such a stir, but it was quite successful in a limited circle, if many comments of certain reviews in some sites are to be believed.
Anurag Mathur's novel The Inscrutable Americans follows the life of an Indian student in USA. The book was a best seller when it was published in 90's. That was a time when American dream was catching up big time with middle class Indians. A village boy Gopal, son of a business tycoon selling Hair oil, comes to US for studying Chemistry. The novel starts with a letter send by him that recounts his experiences in the plane. The author has captured the innocence of the small time boy in that segment wonderfully. Randy is his friend in the college who tries to introduce him to the American way of living. The problem that I find with this novel, which otherwise is readable and witty in many parts, is the over emphasis laid on ... hm, shall I say... getting laid..? The whole concept of cultural difference between US and India as per this novel can be simplified in these two words, which I feel makes it too shallow. Another problem is that Gopal infatuation to score an American girl and the ways he employs for that takes up a huge chunk of the novel and after a while I really felt bored. And after reading the whole book, only parts that lingers in the mind is his hilarious adventures in supermarket and his meeting with the other pretentious Indian guy. 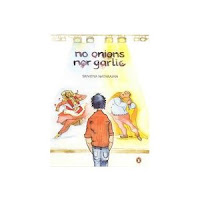 The second novel is No Onions Nor Garlic by Srividya Natarajan. Her first novel starts wonderfully with a drama enactment of  A Midsummer Night's Dream, directed by Tam Bram (Tamil Brahmin, for the ignorant) Professor Ram. Four young men checks out the list of characters and audition for parts, just so that they can try their lick with the fairies in the play. And then they comes to know that they are selected.. for the part of fairies. I read this introduction and couldn't control my laughter and decided No Onions Nor Garlic as my weekend read. But after this initial segment, it was downhill all the way. The novel is supposed to be a criticism of the ways of Tamil Brahmins and the way they never let people of other castes and religion get the upper hand. The battle ground is a college where Professor Ram and his cronies doesn't want any one outside their caste to come up- students or teachers, and they are ready to stoop to any level to stop it. The novel tries to analyze caste politics in work place.
The problem is humor. It is crass... No, I don't have any problem with humor involving bodily functions. Problem starts when it gets repetitive. Whenever a particular negative character enters a scene at least one mention is made about his generous behind. Author squeezes out every possibility to evoke humor out of it till the reader gets a terrible nausea. The characters are black and white and too shallow. The writing is funny in many places but overdoing it causes fatigue. The story is bizarre and tries to spoof old Tamil movies when it reaches half way with many plot twists. Which also makes it boring after a while as it does not evoke any laughter. And the main antagonist Professor Ram, is demonized and humiliated in such a bad way that by the end I felt genuinely sorry for the chap. I really felt that the author had some personal enmity with this character.
Labels: Anurag Mathur, books, Inscrutable Americans, No onions nor garlic, Srividya Natarajan
Email ThisBlogThis!Share to TwitterShare to FacebookShare to Pinterest
Posted by Harish P I at 8:38 PM