Gang leader of the day

"You can't fix nothing, you never worked a day in your life. The only thing you know how to do is hang out with n-----s like us" 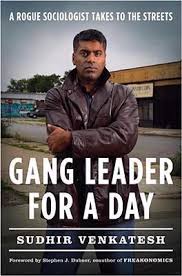 Some time back, Sudhir Venkatesh, a sociologist student, entered a building in a black neighborhood of Chicago to ask some questions to the gangsters selling crack, for his graduation project. They mistook him for a rival Mexican gangster and kept him captive for a whole night. While being released, J.T, the gang leader, told him the only way to get to know about gangs is to hang out with them. Sudhir Venkatesh accepted it and went on to live the next decade hanging out with the same gang, Black Kings. The project revealed lot of unknown facts about gangster life, its psychology, the impression it leaves on others who has to live with them and most importantly the economics of the operation of a gang.
"Gang leader for a day

" is Sudhir's first hand account of his dealings inside Robert Taylor Projects in Chicago, USA, with the gangsters, hustlers, middlemen, squatters, housewives, cops, prostitutes and more. The story got its fame when featured in  Steven D Levitt and Stephen J Dubner's best seller Freakonomics

. In Freakonomics, the authors where trying to make connections with several seemingly unconnected facts. And Sudhir's story was featured in the topic, Why do gangsters lives with mothers?
Sudhir Venkatesh shatters many prejudices that outsiders keep about gangsters. That they are uneducated, rich, violent, do not care about community or education and much more. The life Sudhir saw was that of very organized criminals. They are reasonably educated folks, do not like violence as it can affect business, they try to keep a good relation with community and give a helping hand every now and then, albeit keeping them in terror when needed. And all of them are not rich, only few on the top of the ladder are filthy rich, while others are trying to get the top of the pyramid, alive in one piece.
The book makes us sad at the plight of people living in projects, but inspires the way they copes up with the most resigning situations. The corporate business structure followed by the gang is very similar to any major business corporation. The human story is touching. Sudhir's candid confession of the moral dilemma when encountered with crimes is captivating. The writing style is as good as any good book of fiction.

The book also made me remember this Hindi movie that humanizes gangsters, Phas Gaya Re Obama, in a very comic way, but.
Labels: books
Email ThisBlogThis!Share to TwitterShare to FacebookShare to Pinterest
Posted by Harish P I at 8:14 PM